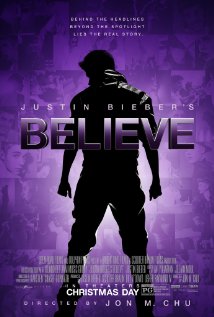 May lack interest for under 6s, OK for children above this age.

Justin Bieber’s Believe is a concert film that centres on the young musician’s rise to international fame and popularity as he embarks on his latest Believe tour. The film contains a wide array of footage, from on-stage live performance pieces and commercial and personal interviews with Justin Bieber and other important figures in his life (including his mother Pattie Mallette, musical mentor Usher, manager Scott Braun and many others). There are also clips of Justin writing and producing his music, as well as video blog communication between Justin and his fans. As a nineteen-year-old growing up in the media spotlight, Justin uses the film to present his stance on music and his career, relationships, his personal values and life in general.

Passion for music; stardom and the media spotlight

Justin hears about a very young fan of his who is dying of brain cancer – he develops a very close bond with her, spending time with the girl and involving her in one of his shows. The young girl eventually dies, and Justin is moved to tears as he discusses the situation in an interview.

Justin hears about a very young fan of his who is dying of brain cancer – he develops a very close bond with her, spending time with the girl and involving her in one of his shows. The young girl eventually dies, and Justin is moved to tears as he discusses the situation in an interview.

Justin Bieber himself is the main product, but also iPhone and Fiji water.

At one point, there is footage of several reporters verbally abusing Justin as he walks past them – their language is bleeped out and no coarse language is actually heard, but Justin discusses the incident.

Justin Bieber’s Believe is a documentary following a young star trying to grow up with some semblance of normalcy under extraordinary circumstances. The documentary format, featuring a number of interviews, may lack interest for children under six.

Justin discusses the dangers of the music industry, the extremely high expectations he sets for himself and the risk of failure present whenever he makes a life or career-related decision. He maintains that the choices he makes are ultimately for his fans because of their part in his success. Throughout the film, Justin emphasises the importance of trying your hardest, striving for greatness and overcoming obstacles with determination, willpower and the support of others. Much of what he says is in stark contrast to recent events and behaviours in his life and parents may now be concerned about their children seeing him as a role model.

This movie could also give parents the opportunity to discuss the problematic nature of stardom, where privacy is lost and individuals lose the ability to live normal lives. How has this affected Justin Bieber in light of his recent problems as reported by the media?