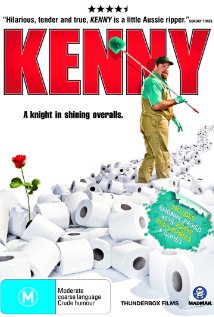 Kenny (Shane Jacobsen) is a hard working employee of Splash Down, Corporate Bathroom Rentals. Although his efforts to provide serviceable and clean public toilets at large corporate events are rarely appreciated and he is looked upon with disdain by those he serves, Kenny undertakes his work with dignity, infinite patience and a generous sense of humour.

As he works through the calendar’s year of events, he must also manage his at times unruly team of workers, find the time to cope with an ungrateful family who are embarrassed by him, and maintain diplomatic relations with a demanding ex-wife for the sake of his much loved son. Kenny shares his thoughts and musings on his experiences, good and bad, and we share in his occasional victories.

It is unlikely that any scenes in this movie will scare or disturb children over eight.

It is unlikely that any scenes in this movie will scare or disturb children over thirteen.

VB beer is displayed and used in this movie.

Kenny is a feel-good mockumentary about life and the philosophy of a decent hard working man. It is a bit of a slow burn, but as the character and humour of Kenny are gradually revealed, the appeal of the movie becomes evident. It may be somewhat dull and confusing for younger viewers, but older children and adults will appreciate Kenny’s approach to the troubles in his life.

The main message from this movie is that no matter what a person does in life, they can undertake it to the best of their abilities, with self-respect, and respect and compassion for others.