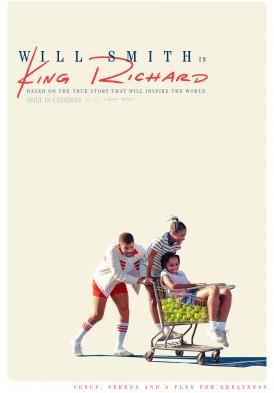 Not suitable under 12; parental guidance to 15 (themes, violence, language)

Richard Williams (Will Smith) had a plan, a 78-page plan that he outlined with his wife, Brandy (Aunjanue Ellis), before his two youngest daughters Venus (Saniyya Sidney) and Serena (Demi Singleton) were born. A plan that would educate the girls and allow them to rise above the crippling poverty that surrounded them; a plan that would gain them entrance into a predominately ‘white’ sport and would help the girls become two of the greatest tennis players the world has ever seen, forging a path set to inspire many youngsters around the world, especially African American girls, who would likewise face hardship and discrimination along the path to greatness. However, raising five girls, including two tennis prodigies, in the ghetto of Compton, California, required more than just a plan. It required ingenuity – everything from fishing used balls out of garbage bins; to making promotional videos to try to get the girls a coach who would train them for free; to hijacking a tennis lesson in order to get them noticed. It required persistence in the face of countless refusals to help or listen or even to see the incredible talent the girls possessed. It required fortitude and humility as Richard and his family stayed the course, refusing to sign for money, refusing to be lured by fame, refusing to accept any offer that didn’t have his daughters’ best interests at heart. Ultimately, their patience and efforts paid off as they showed the world another way, perhaps a better way, to do things.

King Richard is an inspiring drama, based on the real-life story of Richard Williams, father of tennis superstars Venus and Serena Williams. It is a story of hard work and determination; it is a story about overcoming obstacles; and it is a story of triumph in the face of not only adversity but of outright discrimination. While some of the content is not suitable for younger viewers it is an incredibly powerful story, especially for girls, that should be seen by teens of all ages if only to remind them of the power they possess to leave a positive mark on the world (in whatever arena they may choose) and in so doing, lead the way for others.

The main messages from this movie are that there is nothing more powerful in the world than an educated female who knows her mind and goes after what she wants; and also that it is important to dream big, work hard and to have a plan because, “if you fail to plan, you plan to fail”.