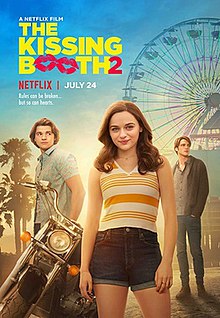 Not suitable under 14; parental guidance to 15 (mature themes, teen alcohol use, sexual activity and coarse language)

Now in her Senior Year, Elle (Joey King) – who gained popularity at her Los Angeles high school as the organiser of the infamous ‘Kissing Booth’, and being the girlfriend of hot and handsome bad boy, Noah (Jacob Elordi) – has new challenges to tackle, for example sustaining her long-distance relationship with Noah who has gone off to Harvard, and making decisions which colleges to apply to herself. As per usual, there are obstacles, like Noah’s new friend Chloe (Maisie Richardson-Sellers) who is outrageously attractive, smart, and popular, having to ‘share’ her bestie Lee (Joel Courtney) with his girlfriend Rachel (Meganne Young), and needing money to open up the option to also go to Harvard. To solve the latter problem, Elle decides to enter a dance competition, together with Marco (Taylor Zakhar Perez), the new kid at school, who isn’t only amazing at dancing, but also “steaming hot” and charming, creating additional tension in her fragile relationship with Noah.

No violence was noted in this movie.

There are numerous sexual references in this movie, including:

The Kissing Booth 2 is the sequel to teenage romcom, The Kissing Booth, based on teen author Beth Reekle’s book series of the same title, and, like the predecessor, packed with rich Los Angeles white kid and high school stereotypes and slapstick humour. While Part 2 is tamer than the first movie, for example, no violent and aggressive behaviour; and featuring less inappropriate, excessive, underage drinking; less indicated sex scenes and this time confined to a private setting rather than in public, some messages are still concerning. Elle should not serve as a role model, as she continues to lie, is ignorant to some others’ needs and feelings because she is too preoccupied with her own agendas, and, ultimately, she decides to stay in a relationship that is marked by suspicion, disappointment, and lack of trust, and still appears to arrange her life much around relationships rather than making independent, self-confident decisions. Due to these aspects, along with underage drinking, using fake IDs, and frequent coarse language, this movie is not appropriate for children under 14 and parental guidance is recommended for older teens under 16. If your child insists that they would like to watch one of the Kissing Booth movies, this one is a slightly better choice than Part 1.

The main messages from this movie are that life and relationships are full of tricky decisions, and that you would save yourself and others some trouble and disappointment if you were honest and communicated openly.

Values in this movie that parents may wish to reinforce with their children include (with the movie serving some examples of how NOT to do things):