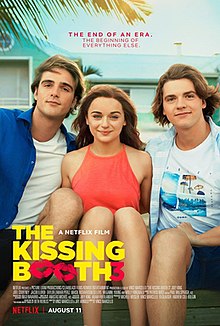 Not suitable under 13; parental guidance to 15 (mature themes, teen alcohol use, sexual activity and coarse language)

School’s out for summer, and for high school graduates, Elle (Joey King) and her bestie Lee (Joel Courtney), it’s going to be their biggest summer ever, before they are off to college. They decide to grab their respective partners, Noah (Jacob Elordi) and Rachel (Meganne Young), and spend the summer at Lee and Noah’s family beach house. As per usual, Elle has difficult decisions to make (go to Harvard and move in with boyfriend Noah versus go to Berkeley with bestie Lee?) and relationship-hot potatoes to handle, trying to find the right balance of working through a bucket list with Lee and spending quality time with Noah. Just to make things even more complicated, handsome and charming Marco (Taylor Zakhar Perez) is also back on the scene and ready to win over Elle’s heart.

The Kissing Booth 3 is the third instalment of the teenage romcom series, The Kissing Booth, based on teen author Beth Reekle’s book series of the same title. Like its two predecessors, it is packed with rich Los Angeles white kid and high school stereotypes and slapstick humour. This film is possibly the tamest of all 3 parts, still featuring underage drinking and teenagers engaging in sexual activities, but less prominently. The focus is mainly on Elle trying to negotiate other people’s, and her own, needs. Here, again Elle struggles with knowing what and how to prioritise, oscillating between selfless and selfish behaviour, and engages in avoidant and dishonest behaviour in order to postpone difficult confrontations. At least, by the end, she and also Noah seem to have made some progress in their development and growth, and it is good to see that people get called out on bad choices or behaviour, and in the end Elle makes a sensible and informed decision independent of the male characters in her life. Mature themes and coarse language make it unsuitable for children under 13 and warrant parental guidance for ages 13 to 15.

The main messages from this movie are that life and relationships are full of tricky decisions, and that it’s important to find out what it is that you actually want in life.