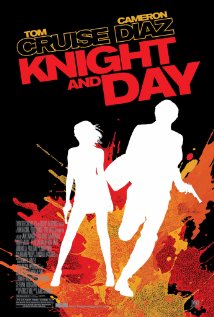 Not suitable under 13, PG to 15 (Violence, Coarse language, Drug use)

June Havens (Cameron Diaz) is walking through Wichita Airport about to board a plane home to Boston when she accidentally bumps into a complete stranger, CIA super-agent Roy Miller (Tom Cruise). A short time later both are on the same almost empty plane headed for Boston. While June is in the plane’s toilet Roy fights and kills the crew and passengers, who happen to be FBI agents intent on killing him. Roy manages to crash land the plane in a corn field but explains to June that as a result of her entanglement with him, she is also now in danger.

After June is seized by FBI agents and rescued by Roy, he tells her about his current predicament.  Apparently Roy was guarding a young wiz kid called Simon Feck (Paul Dano), who invented a Duracell like battery capable of powering a small city forever. Roy discovered that an FBI agent called Fitzgerald (Peter Sarsgaad) was going to kill Simon, steal the battery and sell it to a ruthless arms dealer called Antonio (Jordi Molla). Before Roy could expose him, Fitzgerald framed Roy as a rogue agent, forcing him to take the battery, hide Simon in a safe-house and flee from the FBI.

Much of the film from here on revolves around Roy, June and Simon travelling from one continent to another in their attempt to outrun both the FBI and Antonio.

Knight and Day contains over the top comedy action violence from start to finish Examples include:

Children in this age group are likely to be very scared by the scenes described above.

Children in this age group are also likely to be disturbed by many of the scenes in this film.

Children in this age group are also likely to be disturbed by many of the scenes in this film.

Some children in this age group could be disturbed by some of the above-mentioned scenes.

A man injects June in her arm with a drug she is told is a truth drug. After the drug takes effect June acts in a very care free manner, laughing and heedless of any danger. She also announces that she feels like having sex.

June and Roy drink tequila while on a plane.

Knight and Day is a comedy action film suited to an older adolescent and adult audience. While the plot is crazy, the film is fun and entertaining to watch and has some quick and clever humour along with non-stop action. However, the film does have a very high body count with few real life consequences, and some blood and gore.

The main message from this movie is to live your dreams today rather than putting them off for “someday” as “someday” is code for “never”.