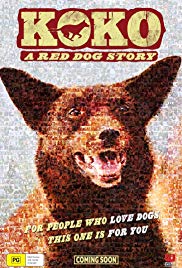 Koko: A Red Dog Story is a documentary about the Australian Kelpie, Koko, who was the main canine actor in the 2011 Australian film, Red Dog. Red Dog was based on Louis de Bernières' best-selling book about the true story of an Australian cattle dog who was well known for his travels through Western Australia in the search of his missing master in the 1970s. Koko: A Red Dog Story consists of original and personal footage, TV clippings, animated scenes and interviews with people who knew Koko, including his first owner and breeder Carol Hobday, Red Dog film director Kriv Stenders, producer Nelson Woss, and lead actor Josh Lucas, as well as re-enacted scenes starring Felix Williamson (depicting Woss), Toby Truslove (depicting Stenders), and Sarah Woods (depicting Carol Hobday). Narrated by Jason Isaacs, the audience follows Koko from when he was a little puppy; his brief but successful career as a show dog; how he came to be cast for the movie Red Dog; the filming and subsequent fame; and also his passing and ongoing legacy.

The special bond between people and dogs; challenges of training and filming with animals; love and friendship; what we can learn from animals.

There are some scenes in this movie that could scare or disturb children aged eight to thirteen, including the following:

There is some mild and infrequent coarse language in this movie, including:

Koko: A Red Dog Story is an entertaining, often funny, and heart-warming tribute to a dog who came to fame and touched people's hearts across Australia and beyond. This film will likely appeal to dog lovers and people who know the original story or related literature or films. This film is suitable for a general family audience but may lack interest for very young children. The emotional scenes may be upsetting for anyone who grasps the concept of losing a loved companion, therefore parental guidance for children up to 8 years old is recommended. Despite the sad scenes, the film ends on a positive notion, cherishing Koko's life and his ongoing legacy.

The main messages from this movie are that animals, just like humans, have their very own personality and character, and that the bond between people and dogs can be a very strong an special one.