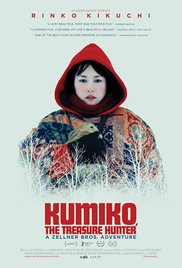 Not recommended under 8; parental guidance recommended 8-15 due to disturbing scenes and themes. Lacks interest for viewers under 15

Kumiko (Rinko Kikuchi) is a 29 year old office worker in a job she hates, with a boss she despises. She is unable to relate to her former friends, her workmates or her mother. The only “friend” she appears to have is her pet rabbit. After finding a video of the movie Fargo hidden in a cave off the coast of Tokyo, Kumiko becomes obsessed with finding the money that one of the characters buries by a fence in a snowy field in Minnesota. Despite the fact that this is only a scene in a movie, Kumiko believes that the money is real, that it is still there, and that she is destined to find it.

Kumiko leaves her job and sets out for Minnesota, hopeful, determined and completely unprepared for what she will find there. Along the way she meets a few strangers who simultaneously try to help her and yet also steer her away from her dream of getting to Fargo. Ultimately alone, and by sheer force of will, she finds her way to the fence from the movie and there discovers something far more important and powerful than money.

Although it is never openly discussed, Kumiko appears to be suffering from severe depression and social anxiety. The notion of mental illness runs throughout the film.

Kumiko the Treasure Hunter is a slow-paced look at one woman’s life. The first half of the movie is in Japanese with English subtitles. The film is intended for a mature audience may appeal to anyone with an interest in Japan or the Japanese language. It may also appeal to academics or anyone more interested in cinematography as opposed to plot or storyline.