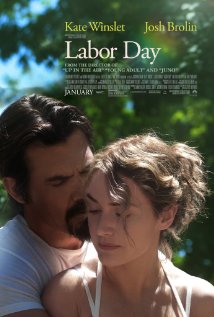 Short takes: Not suitable under 13, parental guidance recommended 13-15 due to violence and disturbing scenes and themes.

Based on the book by Joyce Maynard, Labor Day is a story told by an adult Henry Wheeler (Tobey Maguire) remembering a time when he was 13 years old and an escaped convict spent the five day holiday weekend with him and his mother Adele (Kate Winslett).  Adele and Henry (Gattlin Griffith) had been on their own for some years since Henry’s father Gerald (Clark Gregg) left Adele for another woman. Adele has suffered depression since and rarely leaves her home except for a monthly shopping visit.

It is on one of these visits that a badly injured Frank (Josh Brolin), having jumped out of a hospital window to escape prison, approaches Henry and persuades Adele to give him a lift to their home. Adele tends to his wounds and Henry fits right in, cooking, cleaning, mending things around the house and teaching Henry to play baseball. The police are on constant lookout for Frank so he has to be careful. In the short time that he is there, Frank and Adele fall in love and plan to escape to Canada but their plans go sadly awry.

This age group could also be disturbed by the above-mentioned scenes.

Younger children in this age group could also be concerned by some of the above mentioned scenes. In addition:

Labor Day is a melodramatic, romantic movie which shows the vulnerability of lonely, single women. It is filmed in beautiful locations and this helps to balance the sadness of the story. Despite having a 13 year old boy as a main character, the themes and disturbing scenes make the film unsuitable for children and younger teens might also find it disturbing.

The main messages from this movie are to not accept things on face value but to seek out the truth and also the power of the strong bond between mother and son.