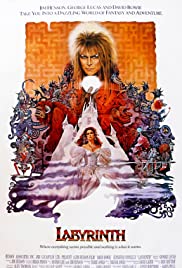 Not suitable under 8; parental guidance to 11 (scary scenes, mild violence and adult themes)

Sarah (Jennifer Connelly) is a petulant and whiny teenager, lost in her own fantasy world and reluctant to grow up. She is annoyed when her dad and stepmother ask her to stay at home and babysit her baby brother Toby (Toby Froud). Toby won’t stop crying and Sarah is so frustrated that she wishes the Goblin King would come and steal him away. Suddenly the house becomes silent and Sarah realises with horror that her wish has been granted and Toby has been taken. In moments, the Goblin King (David Bowie) himself appears mysteriously in her bedroom. He has whisked the baby away to his Kingdom and if Sarah wants him back she has only 13 hours to solve the labyrinth that surrounds the castle and rescue the baby. If she can’t make it, Toby will become a goblin and be lost forever. Sarah bravely enters The Labyrinth, meeting many strange creatures and discovering that nothing is quite how it seems.

There is some mild coarse language and crude humour in this movie, including:

Even if it was originally a box office flop, the quirky 1986 film, Labyrinth, is now a cult classic. It does pull together some exceptional talent: Jim Henson’s (Sesame Street and The Muppets) incredible, pre-CGI, puppetry skills; Terry Jones’ (of Monty Python fame) writing; and of course, an 80s rock soundtrack by David Bowie. For younger audiences it is a dark fairy-tale quest, epic, full of thrills and crazy characters. For other, slightly older viewers, it could be a coming-of-age film full of symbolism; an allegory of a young girl leaving her childhood, shedding her innocence and realising her power. Although a little dated now, it is still a very entertaining film for children in the 8-10 age bracket (with parental guidance), and a bit of a laugh for the adults or anyone who enjoys watching David Bowie swagger about in revealing leggings and a feathered mullet.

The main messages from this movie are that: childhood is like a labyrinth – it can be a dark and dangerous place, full of uncertainty where things are not as they seem; with persistence and good friends to guide us, we can find a way through and resist evil and temptations; Sarah is a good positive role model - even though she is a bit petulant and whiny to start with, she shows courage, persistence and kindness on her journey.