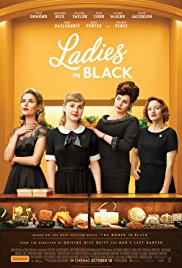 Parental guidance recommended under 13 due to themes. Lacks interest for young children.

In the summer of 1959 Lisa (Angourie Rice), a bookish school girl, takes a summer job in Sydney’s renowned department store Goode’s. At first she doesn’t fit in with Patty (Alison McGirr) and Fay (Rachel Taylor), the worldly women with whom she works, but her sweetness and charm soon win them over. When she is taken under the wing of Magda (Julia Ormond), a European supervisor in the designer dress department and a connoisseur of elegant fashions, her world begins to change in ways she could never have imagined.

Lisa in turn begins to influence those around her. Her open-mindedness allows her to navigate other cultures and appreciate the differences she encounters. Through Lisa’s influence and Magda’s connections, Fay is finally able to meet Rudi (Ryan Corr) the man of her dreams.

Through Lisa’s hard work and persistence her father (Shane Jacobson) finally begins to see that women have as much right to an education as men. Little by little barriers are broken down and the world begins to change for the “ladies in black” as they, in their own ways, influence the future of this country.

There are references to World War II, refugee camps and Nazi atrocities

Ladies in Black is a comedy drama based on the bestselling novel by Madeleine Saint John. It will appeal to mature audiences and gives an accurate, and often humorous, glimpse into female life in Sydney during the 1950’s.

The main messages from this movie are that people are really the same regardless of where they are from and that ‘a clever girl is the most wonderful thing in creation’.