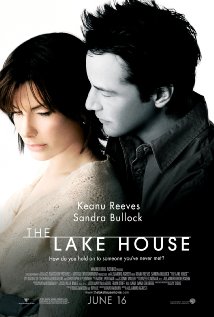 When lonely Dr. Kate Forester (Sandra Bullock) leaves a lake house she had rented in order to move to Chicago a brief note she leaves in the mailbox sparks a strange correspondence between the past and the future.

While Kate lives in the year 2006, her correspondent, architect Alex Wyler (Keanu Reeves) lives in 2004 and through some mysterious force the mailbox at the lake house becomes a gateway through time allowing them to communicate. At first neither can believe what is happening and both are completely confused but slowly a friendship forms and love begins to grow. They both become obsessed with trying to find a way to meet. Alex’s attempts to track Kate down enable him to see and meet her but she is unaware of who he is. After a  disappointing attempt to meet Alex, Kate decides to give up and get on with her life.

In the process of embracing her future Kate makes a discovery that brings all of the pieces together, and demonstrates the importance of faith and patience, giving them a second chance not only at love but also at life.

A man is hit by a bus and killed. Despite Kate’s attempts to save him, he dies in her arms.

Children in this age group may also be disturbed by the scene described above.

Some older children could still be disturbed by Alex’s father’s death and Alex’s grief.

Some older children could still be disturbed by Alex’s father’s death and Alex’s grief.

There is no sexual activity, but in one scene Kate wears a very low cut and revealing top.

The Lake House is a slow-paced, predictable, romantic drama that will appeal to those liking old-fashioned romantic films. Adolescents viewing this film may be confused by the constant swapping back and forth between past, present and future.

The main messages from this movie are that it pays to be patient, for what may at one time appear to be impossible can, at another, become reality.

This movie could also give parents the opportunity to discuss with their children attitudes and behaviours, and their real-life consequences, such as acting hastily actions and being impatient.