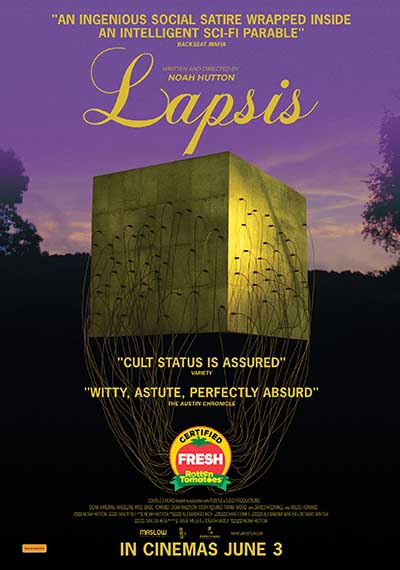 Not suitable under 10; parental guidance to 13 (language, themes). May lack interest under 13.

Luggage delivery man Ray (Dean Imperial) is wary of new-fangled, Quantum, technological systems and vows to never allow anything high-tech into his house. When his younger brother, Jamie (Babe Howard), steadily worsens from a sickness he suffers from, called Omnia, Ray must find a way to pay for the expensive medical treatments his brother needs. Despite his previous promises, Ray finds himself lured by the CABLR company’s assurance of fast cash. Ray signs up to be a cabler, someone who rolls out cables into the wilderness, connecting one Quantum cube to another. On his first cabling run, Ray discovers that he has been given a previously owned medallion which serves as an identification device. He thinks nothing of it until he realises that he has thousands of points in unclaimed credit and is automatically offered a job that will pay $105,000, something that normally takes years to secure. While trying to figure out how the job works, Ray begins to find that not all is as it may seem and that the nickname on his medallion belonged to the man that originally wrote the code for the robotic cablers – little machines that race against their human counterparts trying to put them out of jobs. Ray finds himself in the midst of a corporate conspiracy and is unaware that he alone holds the key to stopping the robotic cablers and making the corporate companies listen to the needs of the employees they are exploiting.

Lapsis is a low budget, science fiction, drama. The characters are well developed and the acting is such that audiences will feel they are on the journey with Ray. However, the plot may be a little confusing at times and lots of loose ends are left at the end. While the film is not suitable for children under 10 and may lack interest for children under 13 it will likely be enjoyed by mature audiences and Sci-Fi enthusiasts.

The main messages from this movie are that people are, before everything else, just people; and that human rights should not be plundered by greedy, digital corporations.