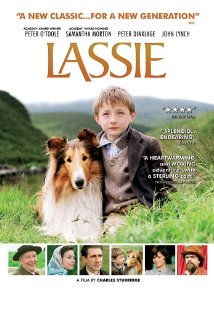 Lassie is the much loved family pet of a poor mining family, the Carracloughs, who live in a village in Yorkshire. The family consists of Mum (Samantha Morton), Dad (John Lynch) and their son Joe (Jonathan Mason) who is about eight or nine years old. They have two dogs, Cricket and Lassie, and while Joe is fond of Cricket, his real affection is for Lassie who is his constant companion.

One day the mine is closed so Dad loses his job. The family is desperately short of money and much against their will, they have to sell Lassie to the Duke (Peter O’Toole). Lassie goes to live with the Duke and his grand-daughter, but keeps escaping and going back to the Carracloughs. Finally she is transported to the Dukes estate in Scotland where Hines (Steve Pemberton) the head kennel man, who has a nasty temperament, makes life even harder for Lassie.

Lassie eventually escapes from the Dukes estate and heads for home. For part of the journey she is befriended by a gypsy dwarf and his dog Toots, but most of the journey is hard and long and Lassie faces many obstacles and dangers on her journey.

Animal distress and cruelty to animals.

There are few violent scenes in this film, including:

In addition to the above mentioned violent scenes, there is some material in this film will upset rather than scare children, including:

Children in this age group are also likely to be upset by the above mentioned scenes.

There are some other scenes that could upset children aged eight to thirteen, such as:

Children over the age of thirteen could watch this movie without parental guidance, but may find some scenes very emotional and sad.

The film contains some very mild coarse language, for example: “You bloody idiot.”

The movie Lassie demonstrates that for a dog, the love of a family is more important than a fancy kennel or a nice bed. Lassie journeys home, against difficult odds out of loyalty for her family and the love she has for them and they for her.

This movie could give parents the opportunity to discuss with their children the issue of cruelty to animals.