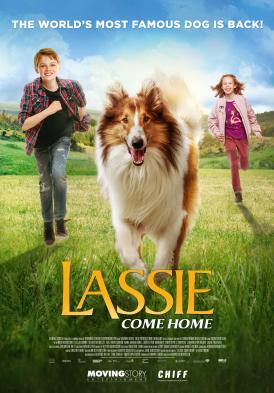 Bavaria, South Germany: After not being able to afford to live in their house anymore, 12 year-old Jo (Nico Marischka) and his parents must move into a rental apartment. Unfortunately, the landlady does not like dogs, so they temporarily place their collie, Lassie, with family friends, Mr Springer (Matthias Habich) and his granddaughter Bella (Bella Bading). Mr Springer and Bella take Lassie along on a trip to North Germany. Missing her family, Lassie escapes – unaware that she is hundreds of kilometres away from home – and starts making her way through the German countryside, while Bella and Jo also run off to go on a frantic search.

There is some mild violence in this movie including:

Lassie Come Home is the latest adaptation of the adventures of the rough collie, "Lassie", who first became famous and popular with the 1943 classic with the same title, starring a young Elizabeth Taylor. Generations of children have since followed Lassie's adventures in numerous movies and a successful TV series. This time, the story is set in modern-day Germany, but sticks with the main ingredients: a deep friendship between a child and a loyal dog, a painful separation, and desperate efforts from all parties to have Lassie come home. There is only mild level peril, scary or violent material, instead, some more interpersonal drama for the human protagonists. Children will enjoy the animal and funny scenes, and probably won't be too bothered by some (in fact, many) quite unrealistic chance events. Australian children might also enjoy getting an impression of the beautiful German scenery, and since the movie was dubbed from the original German into English language, foreign language and subtitles pose no barrier.

The main messages from this movie are that people – and animals – can achieve extraordinary things if they set their mind to it, and that family and friendship are the most important goods.