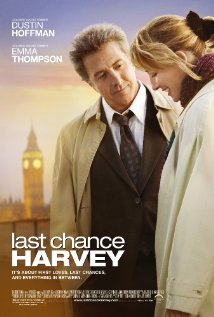 Lacks interest for children and contains some sexual references and mild coarse language.

Harvey Shine (Dustin Hoffman) flies to London from the US to attend his daughter’s wedding. He works in advertising as a jingle writer, a job that he no longer enjoys but still desperately wants to keep. He has been given one last chance to land a deal and is determined to do while also attending the wedding.

Upon arriving in England Harvey learns that a number of last minute changes have been made to exclude him from the wedding arrangements. Feeling isolated and dejected after an awkward welcome from the bride and a series of miscommunications, he opts to return home to settle his business deal instead of attending the wedding reception.
However, as fate would have it, Harvey misses his flight and as a result loses his job. While drowning his sorrows in an airport tavern he meets Kate Walker (Emma Thompson) a single, middle-aged woman.  Kate’s over-dependant mother and friends have made it their mission to find her a man, but Kate has had enough of their well intended meddling and much prefers her writing class or a good book.
An unlikely friendship develops between Harvey and Kate and they spend the day getting to know one another. At Kate’s insistence they attend his daughter’s wedding reception and the events which follow have the potential to change both lives.

There is no violence in this film.

Some children may be concerned when Kate cries as she mentions terminating a pregnancy in her past.

Last Chance Harvey is a romantic comedy suited to a mature audience. Due to the slow pace of the film and frequent scenes of adult dialogue, children are likely to find the film boring.
The main messages from this movie are that is never too late for last chances and that you don’t necessarily need to go looking for love. Sometimes love will find you, especially when you least expect it
Values in this movie that parents may wish to reinforce with their children include: