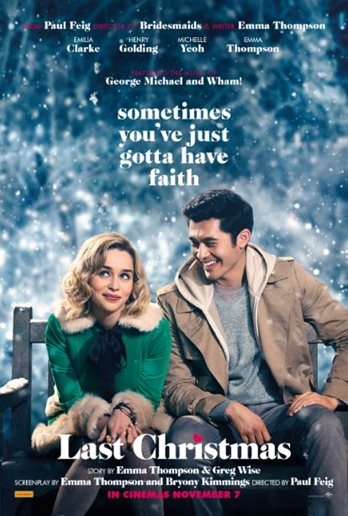 Growing up in former Yugoslavia, young Katarina had big dreams and expectations: gifted with an angelic voice, she envisioned herself as a future musical star. In 2017, almost two decades later, now 26-year-old Katarina (Emilia Clarke) lives in London after her family fled the civil war; prefers to be called "Kate"; and her life is in tatters. Kate’s musical career has not taken off and instead, she works as a shop assistant dressed as an elf in an all-year Christmas shop. Kate seeks distraction in meaningless short-lived affairs, has been kicked out of her shared flat, and has even put off her most loyal friends with her erratic and chaotic lifestyle. As Kate hits rock bottom of her depression, she meets mysterious Tom (Henry Golding), and for the first time in a long while, she dares to address the trauma of her past, reconcile with her family, and give up unrealistic and unhealthy expectations of herself and others.

Children over the age of 13 are unlikely to be scared by this movie but they may get upset about Tom's tragic death and Kate's grief.

There is indicated nudity and sexual activity in this movie, including:

Last Christmas is a tear-jerking romantic comedy/drama starring Emilia Clark, Henry Golding, Michelle Yeoh, and Emma Thompson, that will likely appeal to families with older children who are fans of romance and drama, likeable anti-heroines, quirky characters, crude humour, big emotions, and the spirit of Christmas as a time of reflection and home-coming. Due to sexual references, coarse language and sad themes the movie is unsuitable for an audience under 10 and requires parental guidance for children under 13.

The main messages from this movie are that life does not always turn out the way you thought it would, that it is okay not to be perfect, and that you need love and support in times of crisis.

This movie could also give parents the opportunity to discuss with their children attitudes and behaviours, and their real-life consequences, of: