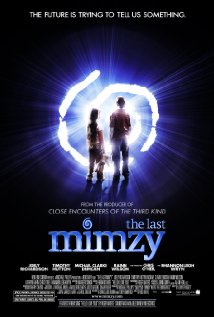 Noah (Chris O’Neil) and Emma (Rhiannon Leigh Wryn ) Wilder are two young children who are looking forward to the Easter break in their family beach house. While playing on the beach they find a mysterious octagonal shaped box which opens of its own accord and contains strange objects, some of which look like small blue rocks. The children take the box and its contents home where they hide it from their parents. They find that the objects have a life form of their own which Emma manages to generate by spinning them. Emma also finds a rabbit in the box that talks only to her and tells her its name is Mimzy.
Emma and Noah increasingly begin to display levels of high intelligence. Noah, who has previously struggled at school, now designs a highly technological spider’s web, much to the amazement of his teachers and parents. Their possessions become the focus of a huge FBI alert however, when unwittingly, Noah unleashes a huge power surge which blacks out half of the state. The whole family is taken into custody and Emma needs to find a way to wrest Mimzy from the authorities and send her back to her own time zone before it’s too late.

The Last Mimzy is a science fiction movie made for older children and one that adults can also enjoy. It has excellent visual graphics and a good story line.

The main message from this movie is not to lose our humanity in the pursuit of knowledge and technology.
Values in this movie that parents may wish to reinforce with their children include: