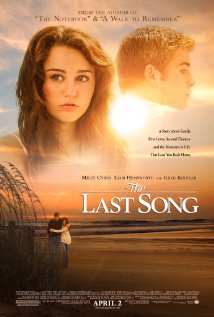 Not recommended under 13, PG to 15 (Themes, Sexual references, Violence)

The Last Song tells the story of Ronnie (Miley Cyrus) a rebellious teenager adversely reacting to her parents’ divorce. The movie begins with Ronnie’s mother (Kelly Preston) sending Ronnie and her younger brother Jonah (Bobby Coleman) off to spend the summer break with their father Steve (Greg Kinnear), much to the obvious annoyance of Ronnie who blames her father for deserting her and her brother. Since her parents’ divorce Ronnie has made every attempt to hurt her father including giving up on her musical talent, a talent taught and nurtured by her father, and making life choices that are destined to keep her miserable.

Throughout the summer break, Ronnie manages to find herself a distraction from her family woes in Will (Liam Hemsworth), a good-looking local, who manages to break through Ronnie’s angry exterior and discover the passionate and carefree side of Ronnie that she had forgotten existed. Ronnie’s new found happiness falters however when she discovers that her father is extremely ill and that this summer is to be the last one that she is to share with him.

Would lack interest for this age group.

In addition to the above-mentioned violent scenes, there are some scenes in this movie that could disturb children aged five to twelve, including the following:

Children in this age group are also likely to be disturbed by the violent and disturbing scenes listed above.

Many of the violent and disturbing scenes listed above, particularly the sexual violence, could concern some young teenagers.

The Last Song is a movie about young romance, with a strong message about the power of forgiveness and the family connection.