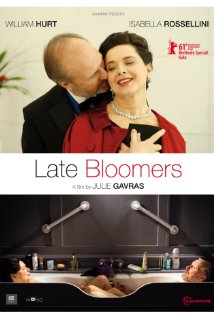 Late Bloomers tells the story of an internationally renowned architect Adam (William Hurt) and his wife Mary (Isabella Rossellini), a retired school teacher and the ways in which they respond to the challenges of becoming old.

Mary concerns herself with her apparent memory loss and becomes involved in a volunteer group, the Grey Panthers, which is headed by her vivacious best friend Charlotte (Joanna Lumley). Adam, after becoming dejected with his new project, designing a retirement community for real-estate mogul Richard (Simon Callow), begins to dress more like a twenty-year-old and surrounds himself with young and upcoming assistants.

The different approaches to growing old taken by the couple lead to them become estranged and their three children James (Aidan McArdle), Giulia (Kate Ashfield) and Benjamin (Luke Treadaway) step in to prevent their parents from joining the growing population of newly divorced over sixties. However, when Mary’s mother Nora (Doreen Mantle) becomes ill with cancer Adam and Mary are forced to re-evaluate their relationship.

The film Late Bloomers contains a number of low-level sexual references. Examples include:

The film Late Bloomers contains occasional use of substances. Examples include:

Late Bloomers is a romantic comedy about aging which targets at an older adult audience. The film has an excellent cast and contains some very clever humour which makes serious comments. Although the film’s target audience should find the film both entertaining and relevant, younger viewers may find the subject matter lacks interest and be bored.

perseverance through adversity and change:

Parents of older children who see the film may wish to discuss the impact of casual sexual affairs on Adam and Mary.