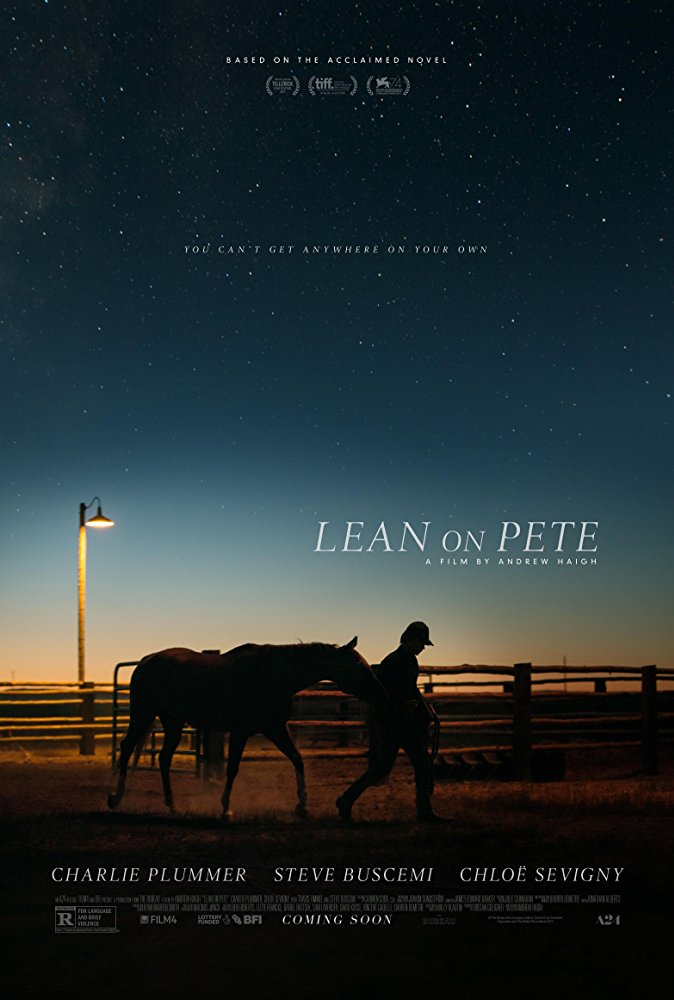 Not recommended under 15 due to violent, disturbing scenes, frequent coarse language, and strong adult themes.

Lean on Pete is a film that has been adapted from a novel of the same name by author Willy Vlautin. The main character is 15-year-old Charley (Charlie Plummer) who lives alone with his single father (Travis Fimmel). Charley finds work with race horse owner and trainer Del Montgomery (Steve Buscemi), helping him care for an older race horse called ‘Lean-on-Pete’. Charley becomes more and more attached to the horse and his concern grows as he learns the fate of race horses that start to lose more races than they win. One fateful night, Charley’s father is attacked in their house and hospitalised, leaving Charley to fend for himself. On the same night that Charley loses his father to a fatal infection, he also learns that Lean-on-Pete is going to be sold for horse meat. In a state of desperation and despair, Charley decides to flee and to take Lean-on-Pete with him. Together, the boy and the horse journey across the American frontier, Charley hoping to find his estranged aunt in Wyoming who might be able to care for him.

There are several scenes of violence in this movie including:

Children of this age may be more able to understand the complexity of Charley’s situation and the despair and destitution that he finds himself under. For this reason, older children may find this film even more distressing than younger children. In addition to the above mentioned violent scenes, there are some scenes in this movie that could scare or disturb children aged eight to thirteen, including the following:

Children of this age are also likely to be disturbed by the above-mentioned violent and scary scenes. Furthermore, they are likely to be more able to understand the complexity of Charley’s situation and the despair and destitution that he finds himself under. For this reason, older children may find this film even more distressing than younger children.

There is constant and frequent use of coarse language in this movie, including:

Lean on Pete is a desperate and tragic portrayal of survival against the odds. As well as exposing an underbelly of poverty and disadvantage in America, the film gives the viewer a glimpse into the seedier side of horse racing. The portrayal of 15-year-old Charley by actor Charlie Plummer is poignant and extremely moving. Teen viewers may find many of Charley’s fears, insecurities and emotions relatable, and parents should be aware that for some viewers the issues and themes may hit a bit too close to home.

The main messages from this movie are that sometimes trying to solve problems on your own can lead to harder struggles; that desperation can lead us to extreme measures; and that unconditional love is a fundamental human need.