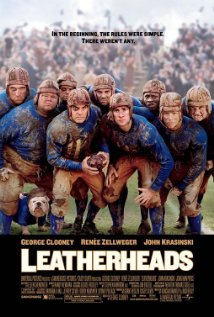 Not recommended under 8, PG to 14 (Themes, Violence, Substance use).

Leatherheads is set in 1925, when professional football attracted no fans and no money as opposed to college football, which was played in large stadiums and attracted large crowds. Dodge Connolly (George Clooney) is the charismatic 45 year-old owner/captain of the “Bulldogs,” a pro-football team, which along with the entire pro-football league is on the verge of financial collapse. But Dodge has a plan to save his team, and recruits a young college football golden boy named Carter Rutherford (John Krasinski). Carter, who is handsome and dashing, attracts crowds of 40,000 to a game and is also a WW1 hero, who single-handedly forced the surrender of a platoon of German soldiers. Dodge plans to use all of Carter’s qualities to attract fans, pack the stadiums, make lots of money and save pro-football. This is exactly what happens until Lexie Littleton (Renee Zellweger), an attractive hard-nosed reporter for the Tribune enters the picture with plans of digging up dirt on Carter.

Leatherheads contains slapstick-like violence, which occurs both on and off the sports field.  For example:

Apart from the above-mentioned violent scenes, there is nothing in the film which is likely to disturb children in this age group.

Apart from the above-mentioned violent scenes, there is nothing in the film which is likely to disturb children in this age group.

Leatherheads contains some mild sexual references and innuendo. For example:

There is some partial nudity and infrequent very low level sexual activity in this movie. Examples include:

Leatherhead is a1930s style romantic comedy aimed at adults and older adolescents looking for some light-hearted entertainment. The main messages from this movie are that: