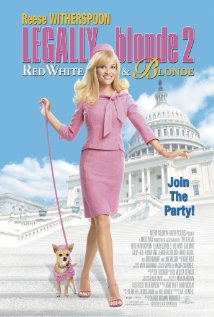 Not recommended under 8; parental guidance to 13 (language, themes)

The sequel to Legally Blonde finds Elle Woods, “the girl with a French manicure and a Harvard Law Degree”, making grandiose plans for her upcoming wedding to Emmett. However when she decides to invite her pet Chihuahua Bruiser’s mother to the wedding, she has to hire a private detective to locate her. He manages to track her down in a laboratory where she is being used for animal experimentation. This turns Elle into an avid animal liberator which causes her to be fired from her new position in a law firm. She travels to Washington to propose a new bill seeking freedom for animals and secures a position with a law firm there. Her new boss, Victoria Rudd, seemingly helps Elle along the way, but is in reality opposed to the bill.

Elle teams up with the hotel doorman who helps her write the new bill. She then has to find enough support in congress to get the bill passed which proves to be quite a challenge for Elle. She calls in her Delta Nu sorority sisters to help with her campaign and discovers that one of the judges was also a Delta Nu girl.

There is some mild sexual humour and a sexual reference in regards to the dog Bruiser who is apparently gay. When Elle goes to pick him up from ‘dog care’ the carer tells her that the Rottweiler has been ‘humping’ him.

There is some smoking of cigarettes and drinking of alcohol.

There is some low level coarse language including the frequent use of ‘Oh my God’ and one use of ‘Holy Crap’.

There is no take-home message from this movie other than that women are completely dumb.