Legend of the Five, The 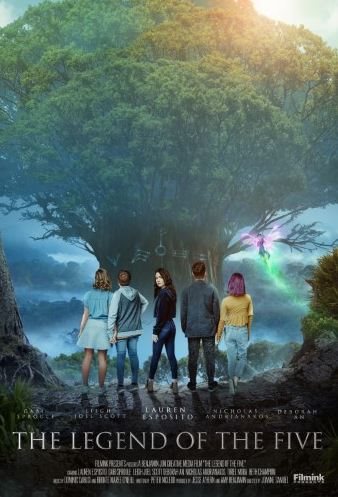 A sorceress (Beth Champion), once the dedicated guardian of the Tree of Life, joins forces with another group who want to ensure the safety of the Tree, in order to save her dying species. Losing her people and losing her sanity, the sorceress becomes obsessed with gaining power from the Tree. Cast out by the others in a bid to protect the Tree, the sorceress spends ages trying to find her way back through portals and enchantments but nothing works. The sorceress manipulates the lives of countless individuals to help her in her quest and many lose their lives in the process as a new guardian, a hideous beast, is now sworn to protect the tree. Her latest, unlikely, cast of five consist of: Zoe (Lauren Esposito) who has just moved back to Australia with her dad after losing her mom to cancer, Kaylee (Deborah An) an angry loner, the nerdy Owen (Leigh Joel Scott) who loves all things academic, the sporty Javier (Nicholas Adrianakos) and pretty and popular Caitlin (Gabi Sproule). The teenagers are on a high school field trip to a museum where they somehow unlock the secrets of an ancient staff and find themselves transported into another world where they must unlock their powers, confront their darkest fears and work together to save themselves from the beast; the Tree from the evil sorceress; and ultimately the future of all mankind.

Death of a parent; magical powers; environmental regeneration; the triumph of good over evil.

The Legend of the Five is an Australian-based fantasy film, featuring some excellent makeup artistry and some basic special effects, that is likely to appeal to older children and teen audiences.

The main messages from this movie are that you have to be strong enough to let things go, that these things are never truly gone, and that all things are connected, including life and death.