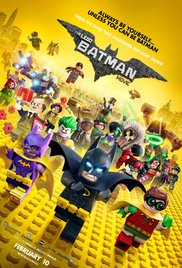 Not recommended under 8; parental guidance 8 to 11 due to violence and scary scenes.

The Lego Batman Movie opens with the Joker (voice of Zach Califianakis) hijacking a cargo plane full of explosives flying over Gotham City; the Joker plans to use the explosives to blackmail Gotham into submission. Along for the ride is an army of Gotham City’s most dangerous villains including Scarecrow, The Riddler, The Penguin, Bane, Two Face, Cat Woman, Poison Ivy, Clay Face and Mr Freeze to name a few. Naturally Batman (voice of Will Arnett) foils the Joker’s plans and saves Gotham.

But the Joker is not Batman’s worst fear. His worst fear involves forming relationships with others; he is afraid of getting close to others and then losing them. To help Batman overcome his fears, Alfred Pennyworth (voice of Ralph Fiennes), coerces Batman into adopting a teenage orphan named Dick Greyson/Robin (voice of Michael Cera), who now becomes his sidekick.

Batman banishes the Joker to the Phantom Zone, a prison for the universe’s worst super villains. However, with the help of Harley Quin (voice of Jenny Slate), the Joker and villains escape.

To defeat the super villains, Batman must learn to work as part of a team and, fortunately, there are others willing to help him.

Because the film involves Lego figures, characters and property can be rebuilt after injury and destruction. However, there are some intense battle scenes and dark and sinister moments with threats of violence to favourite characters that might upset younger viewers, for whom the characters are real. Violence includes:

There are some coarse language, toilet humour and insults in this movie, including:

The Lego Batman Movie is an entertaining animated action comedy which is likely to appeal to Lego  fans of all ages and those who enjoyed first Lego film. It is, however, darker and scarier than the first Lego movie so is not recommended for children under 8 with parental guidance recommended for the 8 to 11 age group