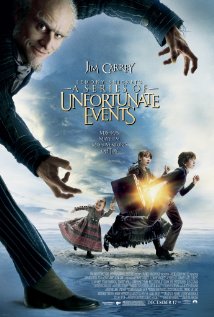 We are warned by a shadowed narrator, Lemony Snicket’s, that the following tale is not a happy one.

After a mysterious fire destroys their home and leaves them orphaned, Violet (an inventor), Klaus (with a photographic memory) and Sunny (who enjoys biting things!) Baudelaire are left with a large inheritance and in the care of their guardian, Count Olaf. Count Olaf, using his skills as an actor, master of disguise and evil genius, plots to secure the inheritance for himself, placing the children in situations of great danger. The children, using their own considerable abilities, courage and cooperation, manage to foil his plans. They are then moved into the care of their kindly Uncle Monty and anxious Aunty Josephine respectively, however after more unfortunate and distressing events (at the hands of a thinly disguised Count Olaf), the children again fall into the clutches of their dastardly guardian. They must use their combined skills one final time to escape from Count Olaf and reveal his true character to the world. In the process they learn what truly makes a family and home.

There are few scenes of physical violence:

There are multiple scenes in this movie that would be scary for younger children:

Some children in this age group may be scared or disturbed by the above-mentioned scenes.

It is unlikely that children over thirteen would be scared by this movie.

Although there are no scenes depicting substance or alcohol use, Count Olaf’s kitchen contains many empty wine bottles.

Count Olaf utters “Damn it” in the presence of the children and when disguised as Captain Sham, likens his face to a “hen’s arse”.

The take home messages from this film are that:

Values to encourage are that: