Lighting up the Stars 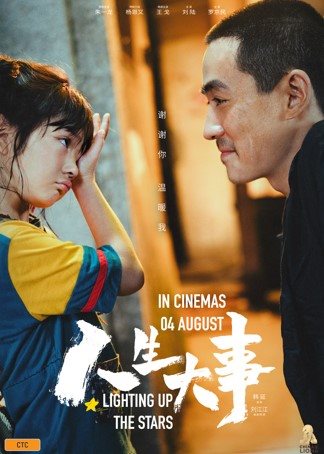 Not suitable under 14; parental guidance to 16 (themes, sexual reference, violence and language) May lack interest under 17.

Mo Sanmei, San, (Yilong Zhu) has always seen himself as a disappointment to his father, never able to live up to the perfect memory of an older brother he did not know. When San gets out of prison he returns to help his father run the family mortuary business, much to his displeasure. Meanwhile, though she doesn’t realise it at the time, young Xiaowen’s grandmother has just died. With her own parents presumed dead and an uncle at the mercy of his cruel wife who doesn’t want to care for a child that isn’t hers, Xiaowen (Enyou Yang) is on her own and frantic to find her grandmother, the one person who loved and cared for her. Her desperate attempts to track down her grandmother lead Xiaowen to San, who would rather do anything than look after a child. When circumstances conspire to throw them together, Xiaowen helps San develop a new appreciation for life as he learns to care for someone other than himself; whilst he also develops a new appreciation for death and how to celebrate and respect the lives of those who have passed away.

Death; Grief; The processing of loss; Cremation and the preparation of bodies; Cheating; Child abandonment and separation.

Lighting up the Stars is a Chinese (Mandarin) film with English subtitles, featuring an excellent cast with wonderful performances, especially from young Enyou Yang. The film depicts commonplace struggles and how, ultimately, everyone has to face the inevitability of death. It is a film that makes you think and reflect, and one that will stay with you long after the end credits have finished. Consequently, this is not a film aimed at children but one that is best suited to audiences over 16.

The main messages from this movie are that each star that shines in the sky represents someone who has lived and loved; and that, in life, fame and wealth are smoke and mirrors and nothing is bigger than death itself.