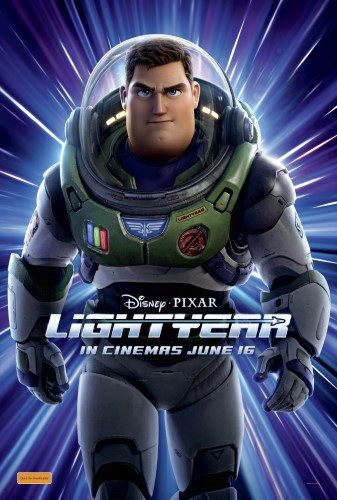 Not suitable under 7; parental guidance to 10 (violence, themes, scary scenes)

In uncharted space, 4.2 million light years from Earth, space ranger Buzz (voice of Chris Evans), Commander Hawthorn (voice of Uzo Aduba) and a rookie ranger are investigating an alien planet when they are attacked by destructive vines and they, along with another 1,200 crew members, are marooned. Feeling responsible for what happened, Buzz takes it upon himself to find them all a way home. He mans the test flights while they try to figure out the correct fuel combination to enable them to reach hyperspace. Each flight is only 4 minutes long but each time Buzz returns, at least 4 years has passed. He watches Commander Hawthorn’s family grow as he returns from each mission, and he befriends the robotic cat, Sox (voice of Peter Sohn), she has left behind for him. It is Sox who, after 62 years, finally cracks the hyperspace code and accompanies Buzz on a final test flight. The pair return to find that the planet has been taken over by the evil robot Zurg (voice of James Brolin) and his lethal robotic army. With only a motley crew of would-be space rangers, including Hawthorn’s granddaughter, Izzy (voice of Keke Palmer), and former convict and explosives specialist, Darby Steel (voice of Dale Soules), Buzz must try to defeat the robots, destroy their ship and get everyone home like he promised. The only problem is that everyone else is already home and Buzz, who has missed a lifetime, must figure out where he belongs.

Lightyear is a Disney-Pixar animated adventure, featuring a wonderful cast, excellent animation and a range of diverse characters. The violence and themes may be a bit much for younger viewers but families with older children and fans of the original, Toy Story film series, will find something to like in Lightyear.

The main messages from this movie are to never give up; that it is ok to ask for help; that home is wherever you make it; and that if you are haunted by past mistakes, it is important to let them go and find forgiveness within yourself.