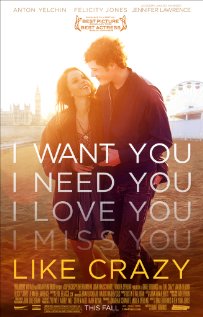 Not recommended under 13, PG to 15 (Adult themes; sexual references; substance use; Coarse language)

Anna (Felicity Jones) and Jacob (Anton Yelchin) meet and fall in love while students at college in Los Angeles. Anna, however, is on a student visa from the UK and when she overstays her visa is not allowed to return to the US for several years. Anna and Jacob try to maintain their relationship from a long distance, with Jacob travelling to the UK when he can. They even marry to try to get the authorities to change the rules but to no avail. Eventually time and distance take their toll. Jacob can’t settle in the UK and while apart they each find new love interests.

Apart from the argument described above, there is nothing likely to be disturbing in this film

Apart from the argument described above, there is nothing likely to be disturbing in this film

There is drinking of alcohol  in this movie, including:

Like Crazy is aromantic drama about first love. The characters and situations are honestly portrayed and the film moves through time quite cleverly using tableaux and imagery. The film is likely to appeal to teens and raises some important discussion topics, but parents of younger teens may be concerned about the scenes of sexual activity, drinking and coarse language.

The main messages from this movie are that relationships take effort and commitment and that sometimes many obstacles need to be overcome to make them work.

Values in this movie that parents may wish to reinforce with their children include honesty and communication in relationships.