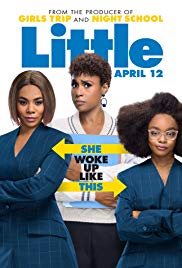 Mean boss, Jordan (Regina Hall), spends her days terrorising both her staff and her assistant April (Issa Rae). One day she is magically transformed into her 13-year-old self (Marsai Martin) and must go back to high school to try and work out how to return to her adult body. As she struggles to find a solution to her ‘big’ problem, the ‘little’ Jordan begins to discover that those around her respect and appreciate her far more when she treats them well.

disturb children aged eight to thirteen, including the following:

Little is a body-swap farce. It is amusing and heartfelt at times, but also quite predictable and sometimes even a little cringe-worthy.  Though there are some good performances by both the younger and adult cast, the film lacks the quality and thoughtfulness of its body-swap predecessors, like “Big” and “Suddenly Thirty.”  This film is likely to be enjoyed most by older children, over 13, but is inappropriate for children under 11, due to mild violence, frequent sexual references, and language.