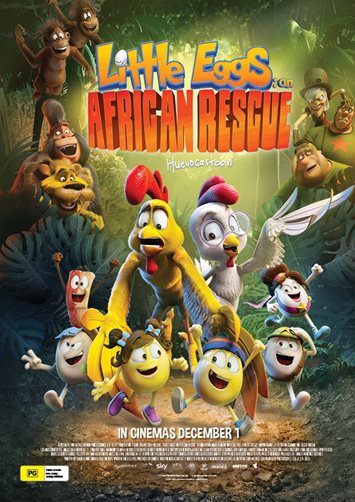 Not suitable under 6; not recommended under 8; parental guidance to 10 (violence, scary scenes)

Toto, a rooster (voice of Bruno Bichir), and his wife, Di (Maite Perroni), have become proud parents of two rare golden eggs, Uly (Dione Riva Santacruz Palace) and Bibi (Angelica Vale). Toto is overprotective of his two eggs and follows them everywhere as he knows the dangers that lurk in the world.

Toto’s fears come true when a Russian agent and her two henchmen steal the golden eggs to take them to an exclusive dinner/auction event in the Congo. The Russians plan to sell the eggs, along with various other exotic species of eggs, to the highest bidders. Toto and Di have to find their way to Africa to save their babies. Along the way they meet up with a band of African animals, led by a lion king, who come to their aid in rescuing their children.

Parenthood; Animals in peril; Separation from a parent.

There is quite a lot of slapstick violence in this movie, mostly done for laughs, including:

The main messages from this movie are that sometimes you have to believe in the impossible; and that the size of your enemy doesn’t matter, you can defeat them with intelligence.