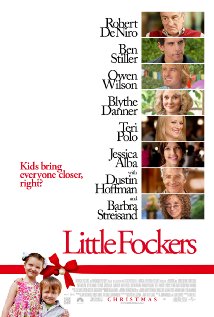 Not suitable under 13, PG to 15 (Themes, sexual references, violence)

Little Fockers, the third instalment in the Meet the Parents saga opens as Greg Focker (Ben Stiller) and his wife Pam (Teri Polo) prepare for the fifth birthday of their twins Henry and Samantha.

Greg, now a hospital administrator, is approached by Andi Garcia (Jessica Alba), a drug company representative, who offers him a moonlighting job presenting a penis erectile dysfunction drug called Sustengo to a group of doctors at a hotel convention.

Jack Byrnes (Robert De Niro), Greg’s father in-law, after suffering a mild heart attack and realising his own mortality, phones Greg and appoints him the new family patriarch, the “God-Focker”, a role that Greg takes on board with relish. A couple of week later, Jack and Dina Byrnes (Blythe Danner) arrive for an extended visit on Thanksgiving.

In order to be able to afford to maintain his house in the style fitting a “God-Focker”, Greg decides to take up Andi Garcia’s job offer. However, due to a comedy of errors, his suspicious father-in-law forms the mistaken impression that Greg is having an affair with Andi, and Greg’s life becomes increasingly complicated.

Little Fockers contains slapstick and comedic violence and accidental harm, including some exaggerated blood and gore. Examples include:

Younger children in this group may also be disturbed by some of the above mentioned scenes.

Little Fockers is the third instalment in the Meet the Parents comedy saga and contains the same type of material seen in the first two films. It is suited to an older adolescent and adult audience with most of the film’s humour and sexual references being unsuitable for children under thirteen. Younger children would also find the film’s storyline of little interest.

The film’s main message is that a harmonious family is achieved through love, tolerance and cooperation rather than a controlling patriarch or matriarch.

Values in this movie that parents may wish to reinforce with their children include commitment to family: Both Greg and Jack view their family as the most important thing and are willing to sacrifice much and undergo hardship for their family.

Parents may wish to discuss the real life consequences of Jack’s over-the-top controlling behaviour. His desire to control every aspect of his daughter’s family causes the family to become less stable rather than more stable.