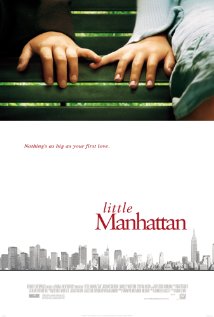 A lot of Little Manhattan is in narrative form, describing Gabe’s feelings for his friend Rosemary. Gabe (Josh Hutcherson) is ten and three quarter years old and all his life he has hated girls until one day he joins a karate class and sees Rosemary Telesco (Charlie Ray), whom he has known since kindergarten, in a completely new light. Gabe begins to feel the pressure of ‘first love’ and with it the roller coaster of emotions and self doubt. To complicate Gabe’s life further, his parents Adam (Bradley Whitford) and Leslie (Cynthia Nixon) are getting a divorce. Neither wants to move out of the apartment however, they both want to be with Gabe, so he has to cope with his mother going out with other men. Rosemary’s family are quite rich and she will soon be leaving for summer camp and then on to private school. Gabe therefore doesn’t have much time to tell Rosemary how he feels.

There is some bullying in this movie by a large older boy at school of whom everyone is scared. In one scene, the boy throws a football at some younger children knocking them out. He then picks on Gabe and Rosemary for being in his territory, and Rosemary attacks him using karate and knocks him down. The boy later recovers and chases after the others on his bike.

Apart from the bullying incident described above, there is nothing particularly scary in this movie.

Apart from the bullying incident described above, there is nothing particularly scary in this movie.

Children over the age of eight are unlikely to be scared by anything in this movie.

Children over the age of thirteen are unlikely to be scared by anything in this movie.

The product ‘Pepsi’ is displayed in this movie.

The movie contains infrequent use of: ‘My God’, ‘Oh God’ and ‘For God’s sake’.

The movie is about first love and the lasting impression it makes. It doesn’t have any take home message. Parents may wish to discuss with their children the use of karate as a means of self defence. It could also give them the opportunity to discuss the impact on children of their parents separating.