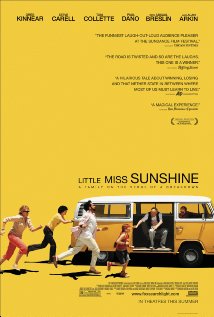 Olive Hoover (Abigail Breslin), aged seven, loves beauty pageants and unexpectedly wins the local contest forcing her family to take her on the long journey from Albuquerque to California to compete in the national ‘Little Miss Sunshine’ Contest. Her father Richard (Greg Kinnear) is an unemployed motivational speaker who believes that the world is divided into winners and losers and that his family are all going to be winners at any cost. Mother Sheryl (Toni Collette) is accepting and tolerant of everyone and believes children should know all the facts and truth about everything and to make their own choices and decisions in life, which she will support. This includes defending her older son Dwayne (Paul Dano), a follower of Nietzche’s philosophy who has taken a vow of silence and hasn’t spoken for nine months. Dwayne hates everybody and his goal is to become a fighter pilot.

The family also incorporates foul-mouthed, sex obsessed Grandpa Hoover (Alan Arkin) who was kicked out of a retirement home for taking heroin. Uncle Frank (Steve Carell) also comes to live with the family as he failed in a suicide attempt and needs to be looked after. Thus the whole family set out on the trip to California in a dilapidated Kombi van which is their only means of transport. What transpires is both a very funny and heartbreaking journey as this dysfunctional family overcome many obstacles to reach the truly awful and highly hypocritical Little Miss Sunshine Contest.

Although no violence is actually shown in this movie, there is reference to Uncle Frank’s attempted suicide, and he is shown shortly afterwards in a hospital gown with his wrists bandaged.

There are some scenes in this movie that could disturb children aged eight to thirteen, including the following:

Some children over the age of thirteen could be concerned by the discussions of suicide.

Little Miss Sunshine is a black comedy aimed at adults. It exposes the hypocrisy in children’s beauty pageants as well as the myth of winners versus losers. The main messages from this movie are that so called ‘losers’ can be winners too and that body image is irrelevant in the broad scheme of things.