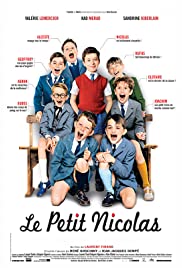 Not suitable under 5; parental guidance to 10 (mild comedic violence). Recommended for confident readers, or French speaking children as film is subtitled.

A French children’s film set in France in the 1950s. Nicholas lives with his Mother and Father and attends a boys’ school where he has a gang of good friends, all who are different in their own special way. Nicholas’ friend comes to school one day very upset about his mother bringing home a baby brother from the hospital. Nicholas starts to worry that maybe his parents are planning on having a baby too, and somehow this idea grows and grows until Nicholas is convinced that not only is a new baby on the way but that his parents are going to abandon him in the woods to make way for the new arrival! Nicholas decides that he must take matters into his own hands and find a way to ‘deal’ with the baby when it arrives. His school friends rally around and together they think up a series of hilarious and mischievous schemes that don’t quite go to plan!

Comedy; 1950s Nostalgia; Getting into scrapes and mischief; Birth of a new sibling; School-yard politics; Gambling.

There are some mild romantic and sexual references in this movie, including:

Little Nicholas is a light and fluffy film adaptation of the 1950’s children’s books series Le Petit Nicolas by French writer Rene Goscinny (who wrote the Asterix comic books). The film is picture-perfect and pretty with some gentle laughs and cheeky misadventures to make everyone smile. An easy family film but the English subtitles are quite fast paced so readers will have to be quite proficient to pick up all of the dialogue. For this reason, it’s best suited to children aged ten or over who are confident readers.

The main messages from this movie are that welcoming a new baby into the family can be challenging but it’s also very rewarding; and that sometimes children misunderstand the intentions of adults.