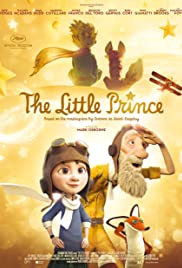 Not suitable under 9; parental guidance to 11 (very sad themes (parting from loved ones, death of loved ones, dying, suicide) and dark / scary scenes)

A modern adaptation of Antoine de Saint-Exupéry's 1943 French novella, The Little Prince. The film follows an 8 year-old girl (voiced by Mackenzie Foy) – whose name is never mentioned – who lives with her single, workaholic mother (voiced by Rachel McAdams), who has great ambitions for her daughter. In order to get accepted into a prestigious college, Mother and Daughter move into the school zone and the Mother devises a rigid study plan for the Girl to follow over the summer holidays. Left by herself for most of the time, the Girl soon becomes distracted by her peculiar neighbour, an eccentric elderly Aviator (one of the characters from the original novella). The two become friends and the Aviator (voiced by Jeff Bridges) tells the Girl how he once crashed his plane in the Sahara Desert and met a curious little boy, the titular Little Prince, and he passes on important life lessons he learned.

The Little Prince is an animated French-Italian production, which takes some liberty from the original tale by telling it from a modern little Girl's perspective, who befriends one of the – now grown old – characters from the original story. Parents who know Antoine de Saint-Exupéry's novella will remember that The Little Prince is in parts a very sad and bleak story, but the messages are beautiful and powerful. Highly artistic stop-motion animation used in parts of the film and a powerful soundtrack make this film a very stimulating and aesthetic experience, likely to appeal to families with teens. However, emotional intensity and sad themes, including reference to suicide, render the film unsuitable for young children and warrant parental guidance for children aged 9 to 11.

The main messages from this movie are that "one can only see rightly with the heart", that is important to enjoy and embrace life, that one should never lose one's child-like curiosity and imagination, and that true love and friendship outlast death.