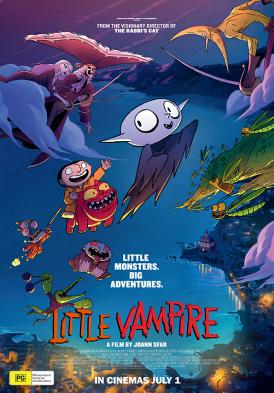 The Little Vampire has been a ten-year-old immortal for over three hundred years, and he is getting bored! He lives in a haunted house with his mother Pandora, her undead pirate husband, and an unlikely gang of ghoulishly cute critters to keep him company, but he longs to meet other children and go to school. His mother, however, forbids him from leaving the house, convinced that the Gibbous, a psychotic moon-faced evil character, will find them and kidnap her Little Vampire. Despite his mother’s worries, Little Vampire hatches a plan to sneak off in the night and visit the local schoolhouse. To his delight, when he writes a note in the schoolbook of a little boy called Michael, Michael responds to his note the very next day! Soon, Little Vampire and Michael become fast friends and Michael is invited into the haunted house to meet Little Vampire’s strange and ghostly ‘family’. Soon enough, the demonic Gibbous hears about the Little Vampire through his network of enslaved spies, and the two boys and their team of ghouls must quickly think of a plan to evade and conquer the evil Being before he does them harm.

There is some mild coarse language and toilet humour in this movie, including:

Little Vampire (Petit Vampire) is a movie adaptation of the popular graphic novel trilogy of the same name by French-Belgian comic writer, Joann Sfar. The film is a delightfully creative and fun caper, especially for kids who love a little bit of a spook and don’t mind a darker twist to their animations. However, for this reason, the film is best suited to children over the age of eight, with parental guidance to 10, as some of the characters can be quite scary.

The main message from this movie is that love and compassion can transform even the darkest hearts into good.