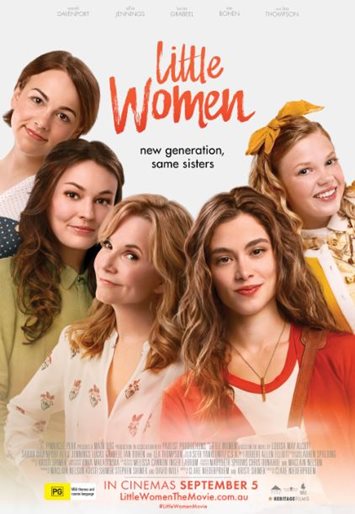 Not recommended under 8, parental guidance to 13 (Themes of death, illness and injury)

Little Women is a modern retelling of a timeless story. It follows the lives of the imaginative March sisters, Jo (Sarah Davenport), Meg (Melanie Stone), Beth (Allie Jennings) and Amy (Elise Jones), who are raised and encouraged by their home-schooling mother (Lea Thompson) while their father (Bart Johnson) fights overseas for their country. The girls are befriended by their rich neighbour’s grandson, Laurie (Lucas Gabreel) who, in time, becomes far more like family than a friend. As the sisters traverse the ups and downs of life Jo is determined to become a famous writer and leave her mark on the world. Despite her tremendous efforts to succeed no one is interested in publishing Jo’s novel until she meets Professor Freddy Bhaer (Ian Bohen) who believes in her writing and sees something special in her. With his encouragement Jo is finally able to find her voice and share her story with the world.

Separation from a parent, terminal illness, growing up and fitting in.

It is unlikely children over the age of thirteen will be frightened by this movie.

Little Women is a modern drama based on the timeless novel by Louisa May Alcott. A heart-warming story of sisterhood that is best suited to slightly older children and will largely appeal to female audiences.

The main messages from this movie are to be good and kind; to realise the power of friends, family and forgiveness; to never stop doing what you love; to build your castles in the air and to forge foundations under them.