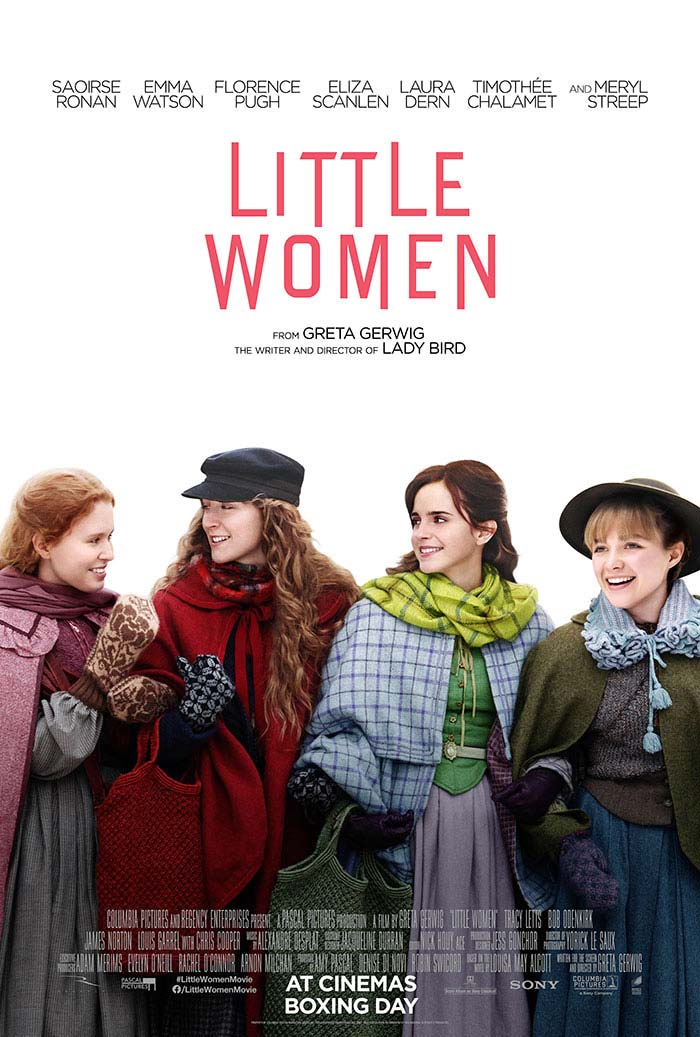 Not suitable under 7; parental guidance 7-9 (Sad themes including serious illness and death)

Little Women is based on the classic novel by Louisa M. Alcott which is set in Concord, Massachusetts during the American Civil War. The story is written by character Jo March (Saoirse Ronan), the second daughter of the March family. Mr March (Bob Odenkirk) has gone to fight for the Union and has left his wife (Laura Dern) to fend for herself and steer their four highly spirited daughters through these difficult times.

Jo has always enjoyed writing stories and plays, which she and her sisters love to perform. Meg (Emma Watson), the oldest, enjoys acting but is more serious than Jo, who is very headstrong and determined to make a life on her own. Their elderly Aunt March (Meryl Streep) tells Jo that she must marry but Jo has no desire to. She befriends Laurie (Timothee Chalamet), the grandson of their neighbour, Mr Laurence (Chris Cooper). Laurie falls in love with Jo but she is more interested in writing.

Jo’s younger sister Amy (Florence Pugh) is more pragmatic and knows that she must marry well. Amy accompanies Aunt March to Europe (much to Jo’s chagrin, as she had been promised this trip), where she finds Laurie in a sad state having been rejected by Jo. The two get together and Amy reveals she has always loved Laurie. Meanwhile the youngest sister Beth (Eliza Scanlen) falls very ill. Jo returns home, having been living and tutoring in New York, to comfort her sister. While in New York, Jo met Friedrich (Louis Garrel), a German professor who is highly critical of her writing. Naturally, Jo is very upset by this and when she leaves to go home Friedrich believes it’s because of him. He follows Jo to Concord in the hope of mending the relationship her.

Little Women is a remake of the classic film based on Louisa M. Alcott’s famous book. The cinematography is visually beautiful and with a stellar cast, the acting is very well done. It is true to the original story, however, it is told in a circular style beginning at the end and with flash backs and memories to fill in the gaps. Younger children may find this confusing. While there is nothing particularly scary, Little Women is a sad story at times and therefore is not suitable for children under 7 and parental guidance is recommended for children aged 7-9.

The main messages from this movie are to rise above adversity, to live your own life and the contributions that women make to life.