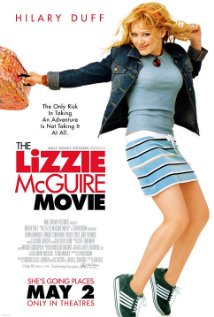 Under 5s may be bored.

Lizzie McGuire is just graduating from junior high school and is called on to give the valedictory speech. She embarrasses herself and everyone else when she manages to pull the curtains down onto everyone. Dizzy Lizzie doesn’t have a lot of self confidence but aspires to be a pop singer much to the amusement of her brother. However her big chance comes when she leaves for Rome with her school mates on an excursion, under the tutelage of the stern Miss Ungermeyer. There she meets handsome Paolo who is half of a famous Italian pop duo. The other half is Isabella, who looks remarkably like Lizzie. Isabella has apparently walked out and left Paolo to perform at the music awards by himself. Paolo sees in Lizzie an opportunity to perform as the duo with Lizzie masquerading as Isabella.

Lizzie is of course thrilled and highly flattered although somewhat unsure of her abilities to sing and dance with Paolo. Lizzie has to sneak away from her group and deceives Miss Ungermeyer, in order to get away with Paolo. She has the holiday of  a lifetime riding on the back of Paolo’s Vespa and seeing all the famous sights of Rome. However all is not what it seems with Paolo who has his own secret agenda.

There is no violent material in this movie.

There is some drinking of alcohol in the background.

There is no coarse language apart from the occasional ‘Oh my God’.

This is really a very light movie with no real take home message. However, children could get the message that deceiving their teacher by pretending to be ill pays off in the end because Lizzie gets to sing at the music awards.

Values parents may wish to encourage include loyalty. Lizzie’s friend Gordo is a very loyal friend and takes the blame for what Lizzie has done, knowing he would get sent home to America.