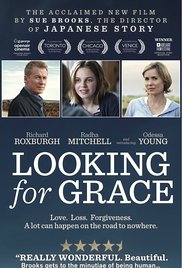 Grace (Odessa Young) and her friend Sappho (Kenya Pearson) take a bus trip from Perth to Ceduna in South Australia, reportedly to see a death metal band. They leave home without telling their parents and having stolen thousands of dollars from Grace’s parents’ safe. Along the way a young guy Jamie (Harry Richardson) gets on the bus and the three make friends straight away. Grace and Jamie are attracted to each other and Sappho therefore, gets left out. She decides to go home and Grace and Jamie spend a night in a motel. Jamie, however, leaves early in the morning, taking Grace’s money with him.

Grace is now alone, without any money and scared. She sets off along the road by herself. Meanwhile her parents Denise (Radha Mitchell) and Dan (Richard Roxburgh) hire a retired private detective, Tom, (Terry Norris) to help them find her.  They eventually do find her along the road but during the journey much becomes evident about their own relationship.

There is little violence in this movie but one of the main characters is hit by a double semi-trailer. Nothing is shown, just the sound of the crash and everyone running to the scene.

Nothing else of concern

When Grace is on her own she finds an isolated garage in which there is a car. She gets inside it to sleep but constantly hears noises in the night and is obviously afraid.

Younger children in this age group may also be disturbed by the above mentioned scenes.

There is quite a lot of coarse language in this movie, including:

Looking for Grace is a long drawn out melodrama. It is interesting in that it is told from several different perspectives but is the same story repeated several times. The content makes it more suitable for older teens and the story raises some interesting discussion points, but it may not hold the attention of many teenage viewers.

The main messages from this movie are that life is often complex and that things aren’t always as they seem.