Lord of the Rings: The TwoTowers 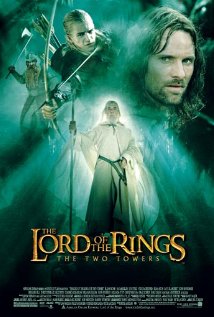 Not recommended under 12, PG to 14 (Violence, Scary scenes)

This is a sequel to Lord of the Rings: Fellowship of the Ring. The end of the first episode saw the disbanding of the Fellowship which has now broken into three groups whose stories intertwine throughout the film.

Frodo and Sam continue their journey to Mordor, now accompanied by Gollum as their
guide. Gollum is torn between his desire to serve his new master or to kill him to regain his ‘precious’. This indecision continues throughout the film. Their path takes them through the Dead Marshes where dead people lie in watery graves lit by flaming torches. Frodo is mesmerised by this and falls into one of the pools. He almost drowns but is rescued by Gollum. Frodo and Sam are captured by the men of Gondor whose captain is Faramir, brother of Boromir. Faramir also greatly desires the ring and the power it wields however he finally releases Frodo and Sam when he comes to realise what’s at stake.

Meanwhile Merry and Pippin manage to escape the Orcs who are beset upon by the Riders of Rohan and are all killed. Merry and Pippin head into Fangorn Forest where they meet Treebeard, an Ent or tree herd. The Ents are very slow to make decisions and are reluctant to become involved in the war between Wizards and men. However they are greatly stirred up by the destruction of their forest and they march onto Isengard in fury, destroying everything but the tower.

Aragorn, Legolas and Gimli follow the trail of the two young hobbits to Fangorn where they again meet up with Gandalf who is now Gandalf the White. These four journey to Rohan where they manage to revive King Theoden who had been under the spell of Saruman. The King leads his men to battle against the mighty host of Isengard and this great battle is the culmination of this part of the story. The men are vastly outnumbered by the Uruk Hai but they battle valiantly on and are helped in the end by Gandalf who has managed to rally a host of over a thousand men from Westfold to claim victory over the host of Isengard.

The supernatural; good versus evil

There is much violence in this film. It is mostly performed by heroes and is successful, with nearly all the victims being evil people or beings. As this is purely a fantasy film there are very few real life consequences. Examples include:

There are many scary images in this film that would terrify children in this age group
including:

This is a film that adults would enjoy - with a great cast, beautiful scenery and good special effects.  It is an heroic, epic tale full of adventure, tragedy and fantasy. Because of its violence and scary scenes, it is really not suitable for children and the M rating is appropriate.

The main message in this movie is that good triumphs over evil. In this case the evil
beings are Orcs, Uruk Hai, Wargs or Wolves, and the evil wizards Sauron and Saruman.