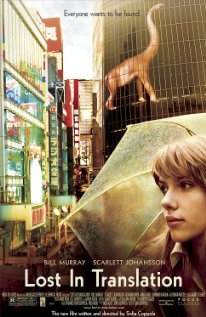 Bob Harris is a jaded, middle-aged movie star who goes to Tokyo to do a TV advertisement for whiskey. The conversation between himself and the television crew has to be interpreted and a lot of it is “lost in translation” with comic results. At the hotel he is staying in, Bob meets Charlotte, a fellow American and a philosophy graduate who is in Tokyo with her husband John. John is a photographer, who is in Tokyo for a photo shoot. He’s a fairly shallow person who doesn’t understand his wife’s need to find answers to life. Charlotte on the other hand, is a deep thinker looking for spiritual meaning to her life. She visits Buddhist temples, listens to self-improvement tapes and attends talks on reincarnation.

John’s commitments take him away for a time and while he’s away Charlotte and Bob, who are attracted to each other, become friends. Bob is ‘taking a break from his wife’ and Charlotte admires his sense of humour and his ‘laissez-faire’, more mature approach to life. Together they enjoy the Tokyo night life and each other’s company, however they’re both aware that there is probably no future for their relationship.

There is just one violent scene in this movie. Bob and Charlotte are in a Tokyo bar when an altercation breaks out; the barman starts shooting with what appears to be a sub-machine gun and throws bottles at the patrons who all run out of the bar.

The above scene would frighten children in this age group.

The above scene could frighten children in this age group.

The above scene could frighten children in this age group.

The above scene might still frighten some children in this age group.

There is some nudity and sexual activity in this movie including the following:

There is quite a lot of drinking and smoking in this movie.

There is a little coarse language including the following:

The take home message is that it takes a lot of work on both parties to make a relationship work. Parents may wish to discuss with older children the concept of infidelity within relationships.