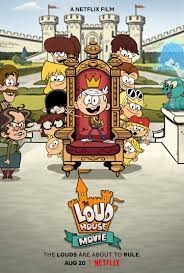 Not suitable under 5; parental guidance to 8 (frightening scenes)

Lincoln Loud (voiced by Asher Bishop) lives in Royal Wood, USA, with his mother, father and 10 talented sisters, Lori, Leni, Luna, Luan, Lynn, Lucy, Lola, Lana, Lisa, and Lily. Always feeling in their shadows, Lincoln longs for something that would make him as special as his sisters. After discovering his family are the ancestral owners of Loch Loud in Scotland, Lincoln takes over as the rightful Duke of the town. With the help of Castle Loud’s groundskeeper, Angus (voiced by David Tennant), Lincoln helps improve the village and life for its people. Meanwhile, Morag (voiced by Michelle Gomez), the quiet-loving and grouchy caretaker, does everything in her power to remove Lincoln and his family from the town, just as her ancestors did to the Louds 400 years ago.

The Loud House Movie is an animated, musical movie based on the television series of the same name. With a simple story line, fun characters, and strong themes of belonging, teamwork, and doing the right thing, this film is likely to entertain a family audience. However, due to cartoon violence and visually menacing characters that may frighten younger children, this film is not suitable for children under 5 and parental guidance is recommended to 8.