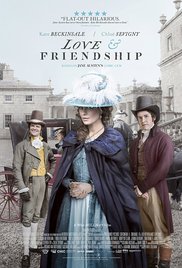 Not recommended under 10, parental guidance 10 to 12, due to themes and lack of interest.

Based on the Jane Austen novella, Lady Susan, Love and Friendship is an irreverent look at the life of the upper classes in the late 18th Century. Lady Susan Vernon (Kate Beckinsale) is a very attractive and witty widow who is also very manipulative and used to getting her own way. She is determined that her daughter Frederica Vernon (Morfydd Clark) will get a good education and that she will marry the likeable but dim-witted (and rich) Sir James Martin (Tom Bennett). Frederica is vehemently opposed to the marriage.

Lady Susan is also interested in finding a new husband for herself.  She takes up temporary residence with her sister-in-law Catherine DeCourcy Vernon (Emma Greenwell), and shows interest in Catherine’s younger, handsome brother Reginald (Xavier Samuel), much to the growing concern of Catherine and her parents Lord and Lady DeCourcy (James Fleet and Jemma Redgrave).

Meanwhile it becomes apparent that Lady Susan has been having a secret liaison with Lord Manwaring (Lochlann O'Mearáin) and his wife Lady Manwaring (Jean Murray) becomes aware of this. The interweaving of loves and friendships becomes quite complex but with surprising results.

Love and friendship is a romantic comedy set in the late 18th Century with lavish costumes and sets. It is fast paced and clever with an intricate plot and interweaving of relationships that make it more suitable for older children, teens and adults. There is, however, nothing violent or scary in this movie.

The main message from this movie is that the women from that period had little but their wits and charm to rely on to succeed in life. Parents may wish to discuss Lady Susan’s behaviour, whether it was justified by her situation, and what else she could have done.