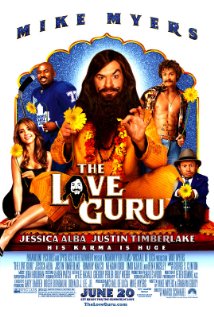 Guru Pitka (Mike Myers), who was raised as a young boy by the Guru Tugginmypudha (Ben Kingsley) is now a new age self-help spiritualist. Guru Pitka has made it to the top. He is a best selling author, has a palace-like home, servants at his beck and call, and loads of groupies. But for all his success, Guru Pitka is an unhappy man. He is number two on the popular Guru chart and wants to be number one, a spot is held by his rival Deepak Chopra, who appears regularly on the Oprah show. Guru Pitka believes that appearing on the Oprah Show is the key to outshining his rival and as a result becomes obsessed with gaining an appearance.
Darren Roanoke (Romany Malco) is a hockey superstar for the Toronto Maple Leafs, but since Darren’s wife Prudence (Megan Good) left him for rival hockey player, Jacques Grande (Justin Timberlake), Darren’s performance on the ice rink has been dismal. The owner of the Maple Leafs, Jane Bullard (Jessica Alba) hires Guru Pitka to help Darren win his wife back and Guru Pitka hopes that successfully reuniting Darren with his wife will be ensure him a spot on the Oprah Show. However, to get Darren back together with Prudence, Guru Pitka must overcome several obstacles, including the Maple Leafs coach, Coach Punch Cherkov (Verne Troyer) and Darren’s overbearing mother (Telma Hopkins).

The Love Guru contains on-field sports violence and slapstick-type violence, with some blood and gore seen. Examples include:

Other material that may offend
Parents may also be concerned about other scenes in the film, including:

Apart from the above mentioned scenes, there are no additional scenes in this movie that are likely to scare or disturb children under five.

Apart from the above mentioned scenes, there are no additional scenes in this movie that are likely to scare or disturb children under eight.

Apart from the scenes mentioned above, there are no additional scenes which are likely to scare or disturb children in this age group.

The Love Guru contains frequent crude humour and sexual references throughout. Examples include:

The Love Guru contains some medium level coarse language and putdowns. Examples include:

The Love Guru, targeted at older adolescents and adults is a send-up that relies extensively on one-line crude sexual jokes and innuendo.
The main messages from this movie are:

Parents who allow their children to see this film may also wish to discuss the attitudes towards sex and women, and the use of drugs shown.