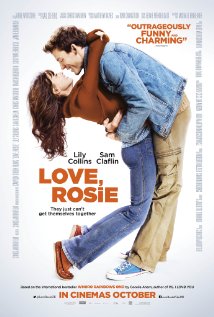 Not recommended under 15 due to themes, sexual references and coarse language

Love, Rosie is a British romantic comedy, based on a novel, about two best friends, Rosie (Lily Collins) and Alex (Sam Claflin), and their journey to find true love and happiness. Having been close friends since they were five years old, the pair has long believed that it would be impossible for a romantic relationship to form between them, despite the strong feelings they both obviously have for one another. After a brief kiss that Rosie fails to recall on her 18th birthday, their lives take a turn for the worse. Alex begins to date attractive women in a quest to forget his desire for Rosie, and Rosie falls pregnant after her first sexual experience at the school dance.

When Alex gets a scholarship to study medicine at Harvard University, Rosie does not have the heart to tell him about the pregnancy and why she cannot join him. Eventually deciding to keep the baby, Rosie puts roots down in her hometown. Alex moves on with his life – he finds a beautiful partner and moves into an apartment of his own, while Rosie must give up her dream of becoming a hotel manager in order to take on the role of a hotel cleaner to support herself and her child Katie.

As their lives move on and they seem to drift further and further apart, Rosie and Alex are gradually drawn back to one another.

There are several sexual references in the film, including:

There is some nudity and sexual activity in the film, including:

There is considerable use of coarse language in the film, including:

Love, Rosie is a romantic comedy that highlights the significance of love and relationships in an individual’s life - not only romantic relationships, but those between friends and family members.  Rosie’s love for her daughter Katie is unexpectedly strong, and takes her entirely by surprise. However, the most surprising thing is the enduring love she shares for her best friend Alex. Despite crossing continents and having years pass, they still appear to be soul mates. Regardless of the success of their other relationships, none are as powerful as the bond they share with each other. The film thus speaks about taking a chance and following your heart instead of your mind.

The film is not recommended for under 15s due to sexual references and coarse language, but it has themes which could lead to useful discussions with older teenagers.

This movie could give parents the opportunity to discuss: