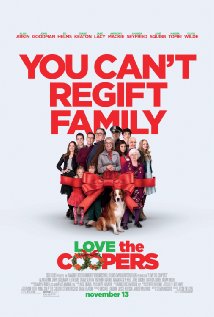 The Coopers are a dysfunctional family who do not necessarily like spending time together, but on Christmas Eve the four generations of Coopers get together to celebrate. Love the Coopers follows the family members on the lead up to their Christmas celebration.

Charlotte (Diane Keaton) and Sam (John Goodman) are considering divorce now that their kids are all grown up and they realise that they may not love each other anymore. Hank (Ed Helms) has lost his job and is struggling to find a new one. Bucky (Alan Arkin) befriends Ruby (Amanda Seyfried) a waitress at his local diner because he is lonely. Emma (Marisa Tomei) is jealous of her sister Charlotte because she thinks that she has it all and is caught shop-lifting. Eleanor (Olivia Wilde) decides to bring home a man she just met because she is afraid that her parents will disapprove of her without a boyfriend.

When the four generations of the family come together, unexpected events occur and information is brought to light that alters the dynamic of the family and strengthens their relationships forever.

Some of the younger children in this age group may be disturbed by some of the above-mentioned content.

Love the Coopers is a rather clichéd Christmas drama/comedy about learning to love and accept your family. Due to its adult themes, sexual references and coarse language, the film is not recommended for under 12s and parental guidance is recommended for 12 - 14 year olds.

The film raises plenty of issues for discussion with older children. The main messages from this movie are that both Christmas and families don’t have to be perfect, and that sometimes it takes effort to keep a family together but it is worth it. It stresses the significance of honesty and open communication, as well as unconditional acceptance of people and their flaws.

The film also explores the nature of divorce, adultery, loneliness and depression.

Parents may wish to discuss the real-life consequences of: