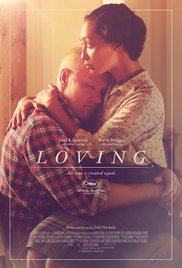 Not recommended under 13; parental guidance to 15, due to themes and lack of interest for young children

This film is based on the true story of Richard and Mildred Loving, whose case challenged segregation laws in the USA in the 1960’s.

Richard Loving (Joel Edgerton) is white and falls in love with Mildred (Ruth Negga) a black woman in Carolina, Virginia. When she announces that she’s pregnant they decide to get married, but to do so, they have to travel to Washington DC as inter-racial marriage is illegal in Virginia.

On arrival back in Carolina they are arrested, charged with miscegenation and sentenced to jail for 12 months. The judge allows them to leave the state instead but they are not to return for 25 years. Some years later, Mildred Loving takes her case to the civil rights movement and a young lawyer, Bernie Cohen (Nick Kroll), agrees to take on their case for free. The case goes all the way to the Supreme Court where it is determined that the prohibition on inter-racial marriage is unconstitutional and puts an end to all race-based legal restrictions on marriage in the United States.

Apart from the violence described above, there is nothing particularly scary for this age group

Some children in this age group could also be disturbed by some of the above mentioned scenes.

Richard and Mildred are often seen in bed together and kissing and cuddling, but there is nothing too graphic.

Loving is a true-life drama set in the 1960’s concerning anti-miscegenation laws. It’s a moving and compassionate film, which proves that love can overcome hatred and bigotry. The movie is quite long and lacks interest for younger children and, while there is nothing particularly violent or scary, its themes make it more suitable for older teens and adults.

The main messages from this movie are that love conquers all, and that quiet persistence wins in the end.

This movie could also give parents the opportunity to discuss laws made to segregate races and how, although times have obviously changed since the 1960’s, racism is still apparent in in the world.