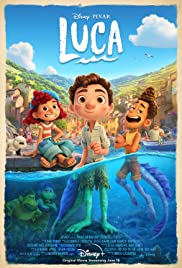 Not suitable under 5; parental guidance to 10 (frightening images, slapstick violence, themes of abandonment)

Luca (voiced by Jacob Tremblay) is the adolescent son of a family of sea-people and knows that the most dangerous thing in the world is to leave the water. But when he comes across another fish-boy, Alberto (voiced by Jack Dylan Grazer), collecting treasures dropped from a boat, Luca finds himself up on land where he discovers that he can transform into a human when completely dry. As Luca and Alberto’s friendship flourishes, they become obsessed with building a Vespa scooter to escape Luca’s nagging parents and see the world. As Luca spends more time out of the water, his mother becomes suspicious and catches him in the act, threatening to send him to the depths of the ocean with his angler-fish Uncle, Ugo (voiced by Sacha Baron-Cohen). Terrified of his deep-water fate, Luca – with Alberto in tow – escapes to the picturesque Italian seaside town, Porto Rosso. Here they meet self-described underdog, Giulia (voiced by Emma Berman), who gets them involved in the town’s annual triathlon (swimming, cycling, and eating pasta). While Giulia’s goal is to beat the previous winner, town bully and Vespa owner, Ercole (voiced by Saverio Raimondo), the boys set their sights on the prize money as a way of getting their scooter. As the three kids train for the race, the boys must keep their secret safe from the sea monster-hunting townsfolk and, whatever they do, not get wet!

Luca is a comedic coming-of-age story that combines crisp animation and the beautiful Italian seaside to create a sweet film that will likely entertain families with children over 5. However, the film is best suited for children aged eight and older, and parental guidance is recommended to ten due to some frightening visual imagery, slapstick violence and themes of child abandonment.

The main message from this movie is that you can only find belonging when you accept yourself.